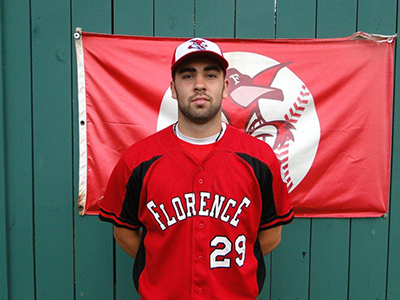 Former Florence RedWolf Lou Trivino made his major league debut April 17 for the Oakland Athletics. Trivino came on to pitch a scoreless ninth inning while striking out two to help the Athletics finish off a 10-2 victory over the Chicago White Sox.

The 6’5-225, right-hander was drafted in the 11th round of the 2013 MLB Draft by the Athletics out of Slippery Rock University where he went 19-8 with a 1.95 ERA and 14 complete games in three collegiate seasons. Across parts of six minor league seasons Trivino compiled a 3.92 ERA over 422.2 innings pitched, including a stretch in which he has allowed only one home run over his last 132 1/3 innings pitched.

After the Athletics had to place Yusmeiro Petit on the beaverment list, the 26-year-old who can touch triple digits in velocity at times was given the call. Trivino displayed that and more as he got out of a jam to allow no-runs and chalked up his first two career strikeouts along the way.

Lou Trivino shuts the door in his debut with 2 strikeouts. A's win 10-2 pic.twitter.com/FgJTfDJo2y

Trivino spent the 2012 season with the Florence RedWolves, finishing with an impressive 5-1 record across nine starts and a 2.98 ERA over 45 1/3 total innings pitched. He marks the fourth former CPL player to make their major league debut in 2018, and the 113th all-time. His debut also pushes Florence’s major league alumni total to 15.

About Coastal Plain League
The Coastal Plain League is the nation’s premier summer collegiate baseball league. Heading into its 22nd season in 2018, the CPL features 16 franchises playing in Georgia, North Carolina, South Carolina and Virginia. To date, the CPL has had over 1,450 alumni drafted and 113 alums – including 2017 ALCS MVP, 2017 World Series champion, 2011 AL MVP and Cy Young award winner Justin Verlander, as well as 2017 NLCS MVP Chris Taylor – make their Major League debut.  For more information on the Coastal Plain League, please visit the league website at CoastalPlain.com, and be sure to follow us on Facebook, Twitter, Instagram and Snapchat @CPLBaseball.