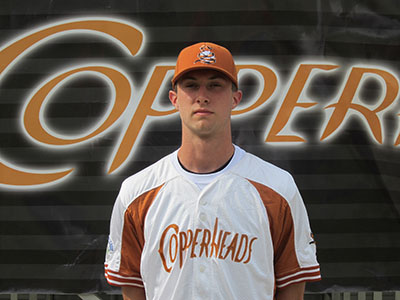 Richards went undrafted out of Drury University, spending two years of his professional career at the Independent level before gaining traction with the Miami Marlins. From there he shot through the system and earned the Marlins Minor League Pitcher of the Year award in 2017 before being invited to Major League Spring Training in 2018.

This spring he continued to impress as he finished with a 0.75 ERA over four appearances and 12 innings to go along with nine strikeouts. His performance earned him a spot on the Opening Day roster and a spot in the starting rotation. His first start was against the vaunted Boston RedSox lineup, one he kept in check early retiring the first seven he faced.

Richards was an All-Star performer for the Copperheads during the 2014 season in which he finished with a 4-1 record and 2.74 ERA over 42 2/3 innings pitched. He marks the third former CPL player to make their major league debut in 2018, and the 112th all-time. His debut also pushes Asheboro’s major league alumni total to five.

About Coastal Plain League
The Coastal Plain League is the nation’s premier summer collegiate baseball league. Heading into its 22nd season in 2018, the CPL features 16 franchises playing in Georgia, North Carolina, South Carolina and Virginia. To date, the CPL has had over 1,450 alumni drafted and 112 alums – including 2017 ALCS MVP, 2017 World Series champion, 2011 AL MVP and Cy Young award winner Justin Verlander, as well as 2017 NLCS MVP Chris Taylor – make their Major League debut.  For more information on the Coastal Plain League, please visit the league website at CoastalPlain.com, and be sure to follow us on Facebook, Twitter, Instagram and Snapchat @CPLBaseball.