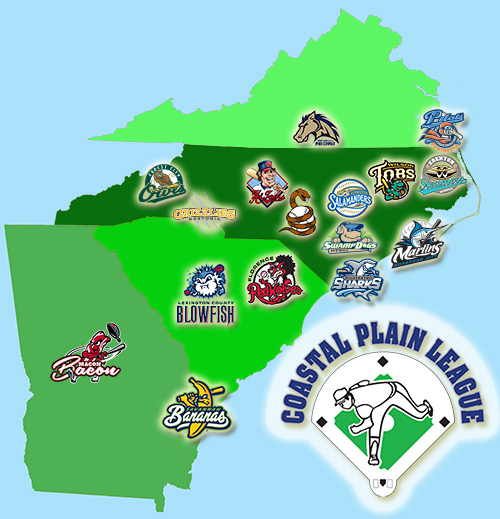 The new and revived Coastal Plain League is a collegiate summer league, featuring top-notched college players from across the nation. The CPL returned in 1997 to fill a void in summer baseball. While there were many summer leagues in operation at the time, there wasn’t really one located in the Southeastern United States.

Former league president Pete Bock first got the idea for the CPL in the early 1990’s when his son, Jeff, a pitcher for Barton College, was spending his summers playing in the Valley League. After making several long trips to see his son play, Bock, a long-time minor league sports executive, began wishing there was a summer league closer to home. A few years later, he partnered with league Chairman and CEO Jerry Petitt to form the new Coastal Plain League.

Since then, the Coastal Plain League has rapidly grown to be among the premier summer collegiate baseball leagues in the country. The CPL prides itself on creating a professional, minor league-like atmosphere for all its players, coaches, umpires, and fans each and every summer! Celebrating its 22nd season in 2018, the CPL proudly features 16 teams across Georgia, North Carolina, South Carolina and Virginia. Many of the CPL teams play in former minor league stadiums and cities, as well as in newly constructed stadiums that meet Class A standards. Teams in the CPL play in front of large crowds of passionate fans throughout the summer months - as league attendance has averaged over 550,000 fans over the last five seasons. Players come from all over the country to take part in the best summer collegiate baseball experience each year. Our teams and league office work closely with each player and school to ensure a positive and long-lasting relationship, as well as helping to secure host families and summer employment for our players if desired.

With a 56-game schedule (running from late-May to mid-August), annual Pro Scout Day and All-Star Game, and championship playoffs system, the Coastal Plain League prides itself in returning players to their respective schools as better, well-rounded individuals who can instantly help their program succeed on and off the field; as well as be successful at the next level of baseball.

Highly ranked and thought of by players, coaches, and baseball publications and scouting notebooks such as Baseball America, Perfect Game Crosschecker, and Ballpark Digest, the Coastal Plain League also ranks high in the eyes of Major League Baseball and its scouts. In fact, heading into the 2017 season, the Coastal Plain League has seen over 1,450 alumni drafted by Major League teams; and even more impressive is that we have had 108 alums who have made it to the Majors. Some of our most notable alumni include 2011 AL MVP and Cy Young winner Justin Verlander, Ryan Zimmerman, Mark Reynolds, Kevin Youkilis, and NFL Super Bowl XLVIII champion quarterback Russell Wilson.