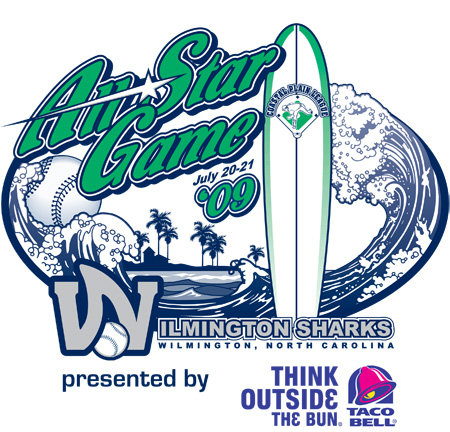 The Coastal Plain League 2009 All-Star Fan Fest and All-Star Game will be hosted by the Wilmington Sharks on July 20th and 21st at Buck Hardee Field in Wilmington, N.C.

The two-day event will feature a Fan Fest on the night before the All-Star Game, highlighted by a All-Star Home Run Derby. The league’s annual All-Star luncheon and All-Star Game will take place the following day. There will be several opportunities for fans to interact with the All-Stars during the event.

How Players Are Selected:
The 2009 Coastal Plain League All-Star Teams will be voted upon by each of the 14 head coaches and one media representative for each club. Possible All-Star candidates will be listed by position on their respective divisional (North, South, West) ballot, of which the coaches and media will vote from. Head coaches will not be allowed to vote for their own players, while Media reps will. The votes will be tallied and the 54 All-Stars will be known.

Then, the two All-Star head coaches will take part in a draft to see which team (National or American) each All-Star player will end up on. The All-Star head coach with the highest winning percentage in the first half of the regular season will pick first and via a teleconference with the League office, the two coaches will go back and forth filling their rosters until the last player is taken.

How Coaches Are Selected:
The 2009 Coastal Plain League All-Star Coaches will be determined based on First-Half Champions and overall winning percentage in the first half. The two All-Star head coaches will be the two coaches with the best overall winning percentage in the first half and who also won their respective division’s First-Half championship. The remaining coach from the other divisional First-Half championship team will be an assistant for one of the two All-Star teams based on geographics.

Out of the remaining coaches, the one with the next best overall winning percentage in the first half will be the other assistant coach. Finally, the remaining head coaches from the remaining CPL clubs not represented yet will all serve as an assistant for one of the two All-Star teams.

National and American CPL All-Stars Finish in a Tie, 2-2 after 10 press release

Round 2: Three (3) hitters from the National and Three (3) from the American
- Top two (2) hitters, regardless of All-Star team, advance to final round

Round 3 (Championship Round): Top two hitters in derby thus far
- Hitter with the most total points after round three (points from rounds 1-3 combined) is crowned Champion